This is the first stamp to use what’s called thermo-chromic ink. When your finger touches the stamp when it’s black, the image changes to the moon one on the right. Once the stamp cools, the black eclipse returns.

The next real total solar eclipse is expected to happen August 21st.    For a swath of the country from Portland, Oregon, to Charleston, South Carolina, it will look like someone just turned off the sun in the middle of the day.  St. Louis falls in the path of the eclipse. Even if you live elsewhere in North America, a portion of the sun will partially disappear near midday.

It is being called the “Great American Eclipse.” And you can mark it on your calendar, down to the millisecond.

During the celestial event, the moon will pass between the sun and the Earth, appearing to block the sun for almost an hour and a half. You can replicate an eclipse by holding a flashlight and waving your hand slowly across it.

When the moon blocks the sun, it will cast two types of shadows. The umbral is the small shadow cast on Earth where people will be able to see a total eclipse. Others will experience the penumbral shadow, where they will experience a partial eclipse.

Kansas City, Nashville and St. Louis are some of the cities that will have a good chance of seeing the sun totally covered.

Space enthusiasts are already starting to get excited about the eclipse and some, like us, are counting down the days. Many are booking hotels for the big moment, while others have had their rooms booked for years.

The real question is, have you figured out where you will be on August 21? 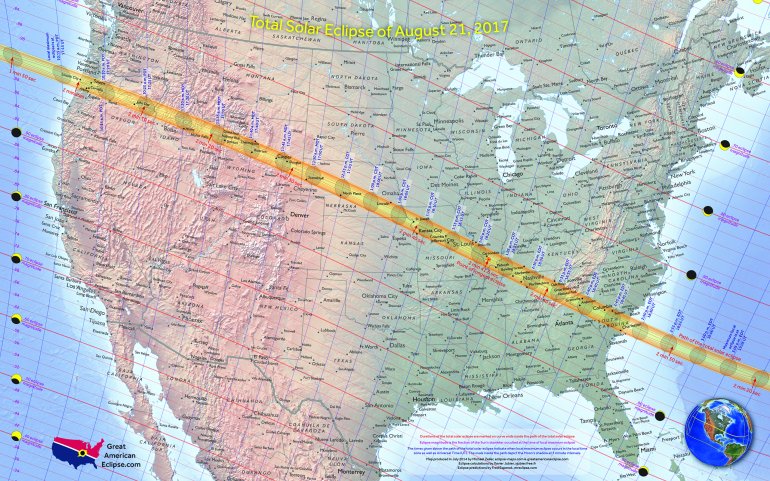 O'FALLON, Mo. (AP) — With the number of coronavirus patients requiring hospitalization rising at alarming levels, Missouri and perhaps a handful of other states are unable to post accurate data on COVID-19 dashboards because of a flaw in the federal reporting system.

Since Tuesday, the Missouri Department of Health and Senior Service’s coronavirus dashboard has posted a message that the total number of patients hospitalized for COVID-19 has been underreported since Oct. 17. The note blamed “challenges entering data” to the portal used by the U.S. Department of Health and Human Services for collecting daily hospitalizations around the country.

Colonel Eric T. Olson, superintendent of the Missouri State Highway Patrol, announced the results of the 2020 Public Opinion Survey. Through a web based survey, a total of 2,476 people responded to from August 1 to 31, 2020. This included 1,944 Missouri residents, 64 nonresidents, and 468 respondents who did not disclose this information.

Jefferson City, MO—Missouri State Treasurer Scott Fitzpatrick and the Department of Labor and Industrial Relations’ (DOLIR’s) Division of Employment Security have partnered to help return Unclaimed Property to Missourians who have applied for unemployment benefits.

"Unclaimed property exists because at some point contact information related to an owner of an account somewhere has gone bad and cannot be located," explained State Treasurer Scott Fitzpatrick. "In the treasurers office unclaimed property is something we are constantly working at trying to return."

Nelly says he loves The Masked Singer; why he isn’t doing it

Amazon wants to pay you for your receipts

How many parents are stealing their kids’ Halloween candy?

15-year-old shot to death inside car

New iPhone 12 now for sale; trade-in offers and how you can get it for free