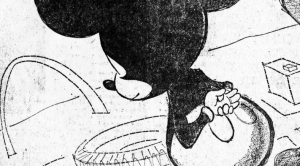 ST. LOUIS (AP) – Imagine packing up the kids and heading for that dream vacation to a Disney theme park … in St. Louis.

It almost happened, and one of the few remnants of the Disney park that might have been goes on the auction block next week, 13 pages of 1963 blueprints spelling out plans for “Walt Disney’s Riverfront Square” in St. Louis.

The company wanted to build a fully enclosed indoor theme park near the Mississippi River, blocks from the Gateway Arch that was under construction at the time.

Money doomed the project. Disney was willing to pay the cost of rides and attractions but wanted St.Louis leaders to foot the bill for the building, and they refused. Disney officially dropped out in 1965 and turned attention to Florida, where Walt Disney World is now one of the nation’s top tourist attractions.

Learn more about the project here

JEFFERSON CITY, Mo.-- Dozens of pro-life supporters gathered in Jefferson City this morning to take part in the Midwest March for Life. The group is rallying to call for an end to abortion in the state.

The march was followed by a rally with several speakers from across the state.

VALMEYER, Ill. – One of three teenage victims has been identified after a violent wreck killed them Tuesday in Monroe County have been identified. The rollover crash happened just before 2:30 p.m. north of Valmeyer on Bluff Road at Trout Hollow Road.

The Illinois State Police is handling the investigation. Bommarito Automotive SkyFOX was over the scene. The crash involved a vehicle and a box truck.

ST. LOUIS, Mo. - Panera is giving away a limited number of custom "Bread Bowl Bikes." The unique two-wheeler comes with an insulated basket inspired by the restaurant's signature bread bowl. Sign up to win one now through April 22nd at breadbowlbike.com.

Panera also has an Earth Day deal to get 50% off soups. They are a part of the chain's "Cool Food Meals." These menu items have been identified to help reduce your carbon footprint. The ingredients in them do not take as many emissions to produce. Just the code COOLFOOD50 when ordering through April 22 online, in the store, or at the drive-thru.

Kirkwood Schnucks remodel expected to be complete by mid-summer

Man shot and killed at residence in Belleville Tuesday night, another injured