ST. LOUIS – Sharp disagreement between the St. Louis Police Chief and the St. Louis Circuit Attorney over whether city police was asked by the circuit attorney to help in the investigation of Governor Eric Greitens.

Kim Gardner had said she asked for Chief John Hayden’s help in the investigation and that he directed her to the FBI for help.

Hayden said he was never asked to help with the Greitens case and that he never turned the circuit attorney down.

The chief said there was no decision for him to make because he wasn’t presented with options.

In an impromptu news conference on February 27, Susan Ryan, a spokeswoman for the circuit attorney’s office, said Chief Hayden was asked to provide assistance in the Greitens case. She said Chief Hayden directed them to the FBI.

Ryan said that was one of the reasons her office hired a Michigan investigative firm that got a $10,000 retainer. Gardner also agreed to pay their investigators $250 per hour plus expenses.

Chief Hayden said the circuit attorney was not accurate when she said the police department declined to be involved with the case.

“When the city’s top law enforcement officer calls the city’s chief of police to discuss an investigation into the highest elected official in the State of Missouri, there are no hypotheticals.”

You can read Gardner’s entire statement below: 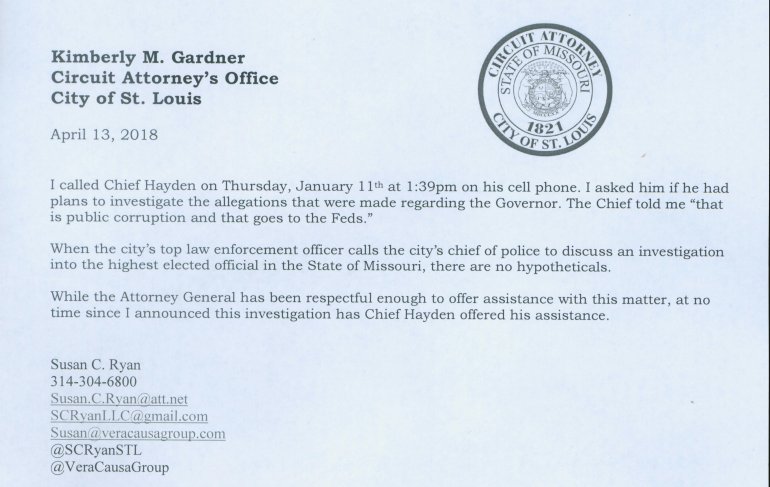 One killed, three injured in shooting at north St. …

Rainscaping is a way to manage stormwater runoff

The warehouse fire in Madison, Illinois is under …

Anne Heche on life support, survival of crash ‘not …