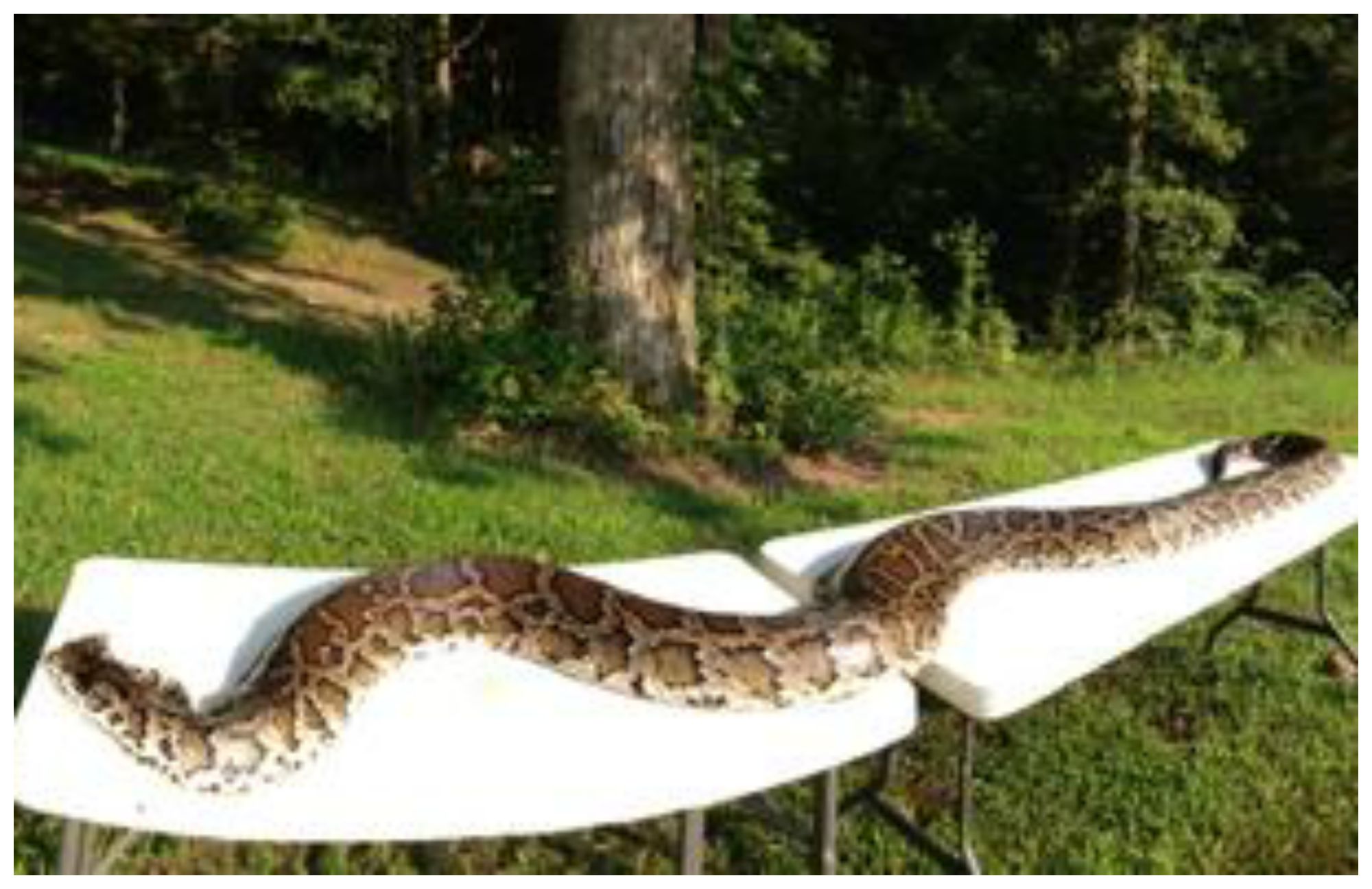 WARREN COUNTY, MO (KTVI) – It had been a terrifying past few days for a neighborhood in rural Warren County, near Jonesburg in neighboring Montgomery County.

There was massive snake on the loose.

The terror ended around 2:30 Tuesday morning.

True, residents are used to seeing snakes but not 14’ 7”, 160 pound Burmese Pythons.

“[Troy] he was right by my side the last 3 days because I didn’t want him near something of this size,” said Troy’s mom, Leagh Dement.

“I was the first one to see it,” said neighbor, Larry Fahrig.

He saw the snake going after his poodle Sunday night.

He called neighbors for help but the snake slithered away.

Burmese Pythons are carnivores.  They kill their prey by constriction; suffocating small animals then swallowing them whole.

One neighbor had two dogs disappear, but doubted the snake ate them.

Another neighbor had three chickens vanish in recent days.

Other predators like owls and coyotes typically leave behind partial carcasses or at least a pile of feathers.

These chickens disappeared without a trace.

Residents called the sheriff’s department but said it was of no help.

The reached a snake expert who offered to capture it for them but said it would be a few days because he was out of town.

Then, Pauline Horstdaniel woke up to her St. Bernard-Lab mix having a fit in the yard in the early morning darkness Tuesday.

She feared the snake could kill her dog in spite of the dog’s large size.

“I was terrified,” after seeing the snake, she said.  “I got my husband out of bed.  He’s out there in his underwear with his gun.”

They feared his handgun wouldn’t be enough to stop the snake.

They called Troy’s dad who killed the snake with two blasts of a shotgun.

Troy’s mom was trying to save the skin, though she wasn’t sure why.

“You only see snakes like this in the movies and at the zoo,” she said.

Residents didn’t want to kill the snake but felt they had no choice.

“It`s a shame that animals have to be killed because somebody just didn`t care about it,” Fahrig said.

From its markings the snake appeared to be a Burmese Python.

They do not grow or live in the wild of Missouri.

It was a somewhat common exotic pet.

There were no reports of any missing pet snakes in the area.

A Department of Conservation spokesman told FOX 2 pet Burmese Pythons often get too big for their owners to handle and the owners dump them in the wild.

New at 10, neighbors take out massive snake terrorizing their homes only @FOX2now pic.twitter.com/pIyv2mkOVU