Gabby Douglas conceded Sunday she hadn't performed as well during the 2016 Olympics as she had hoped, especially considering her gold-winning turn at the 2012 Games.

But just as confusing and "hurtful" to the 20-year-old gymnast, per the Washington Post, was criticism about everything from the look on her face as she watched teammates compete to how she hadn't placed her hand over her heart while the national anthem played during a medal ceremony Tuesday—leading her to stay away from online "negativity" while in Rio, an emotional Douglas said after a disappointing uneven-bars routine over the weekend.

"When they talk about my hair or me not putting my hand up on my heart or me being very salty in the stands, they're really criticizing me, and it doesn't really feel good," she said.

The remark about her hair referred to backlash she faced in 2012, when many chose to focus on her appearance rather than her multi-gold-medal performance.

Her mom, Natalie Hawkins, tells Reuters that Douglas is "heartbroken" about recent accusations, including that she's "unpatriotic" (Douglas already apologized for the national anthem kerfuffle on Twitter). 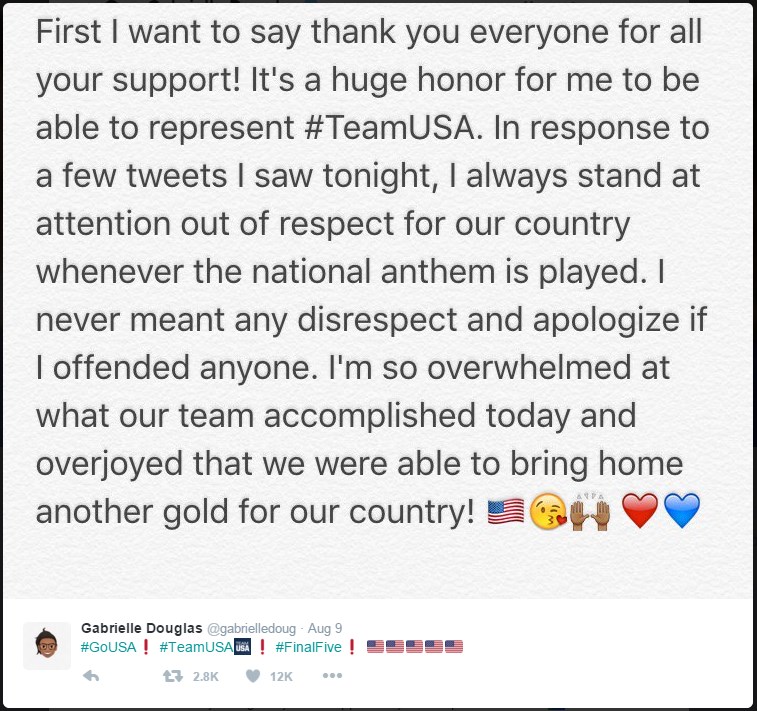 "I don't think respecting your country or your flag boils down to whether you put your hand over your heart or not," Hawkins says, pointing out her family's military history. "It's in your actions towards your country."

A Los Angeles Times editorial also supports Douglas, saying she has nothing to apologize for on the patriotism front and noting, "Our Constitution allows us to express patriotism, or not, as we see fit. That's something worth being patriotic about."

This article originally appeared on Newser: Why gymnast Gabby Douglas is 'heartbroken'

How Bacteria in Your Mouth Make Colon Cancer Worse
Study: Women Are Hurt More by Breakups, But…
Texas Teen Committed Suicide by Cobra

Garland Nelson’s attorneys argued that a murder suspect cannot also be charged with abandoning the victim's corpse without violating his right to remain silent against self-incrimination. But prosecutors said Nelson could have anonymously reported where the bodies were located.

LOUISVILLE, Ky (AP) — A grand juror who won a court fight to speak publicly about the Breonna Taylor investigation took issue Tuesday with statements by Kentucky's attorney general and said the jury was not given the option to consider charges connected to Taylor's shooting death by police.

The anonymous grand juror had filed suit to speak publicly after Kentucky Attorney General Daniel Cameron announced last month that no officers would be directly charged in the March shooting death of Taylor during a narcotics raid.

JEFFERSON CITY, Mo. (AP) — The City Council in Missouri’s capital city approved removing a Civil War marker dedicated to a Confederate general amid a dispute about the accuracy of its description.

The marker is dedicated to Confederate Gen. Sterling Price. It claims that Price planned to attack Jefferson City in Oct. 1874 but instead bypassed the city.