COLLINSVILLE, IL – Collinsville police believe that a woman called in a bomb threat to a WalMart store in hopes of ending a traffic stop. Around 3:20am on Monday, November 5, 2018, officers pulled over a truck with a man and woman inside on the southbound entrance ramp to I-55 from N. Bluff Rd. The man is identified at Max W. Vance, 37, and the woman as Shelly L. Fritch, 32.

While the officers were doing paperwork and background checks during the traffic stop, a woman called the Collinsville Police Department non-emergency line and indicated that she had left a bomb at the Collinsville WalMart, generating a heavy police response.

Information gathered during the traffic stop led police to conduct a search of the pickup truck, which revealed two illegally possessed firearms. Vance, who is a convicted felon, was arrested. Fritch was released from the scene along with the truck. Those officers then responded to the WalMart scene.

Follow up investigation led police to believe the bomb threat was likely called in by Fritch while the officers who made the stop were doing paperwork in the cruiser. They claim she was hoping to divert the officer’s attention. They do not believe that Wal-Mart was ever in any danger. 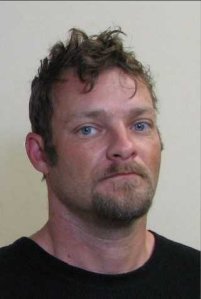 Bond for Vance has been set at $30,000, and Fritch at $10,000. Vance is currently in custody at the Madison County jail. Fritch remains at large.