More Athlete of the Week Stories

The St. Luke's Urgent Care/Fox 2 Athlete of the week for November 7, 2020 is Ja'Marion Wayne. He led his football team, the Parkway West Longhorns to a 49-28 playoff win over Summit on November 6, 2020. Wayne caught a pair of touchdown passes and also intercepted passes while playing defense for Parkway West last night.

The St. Luke's Urgent Care/Fox 2 Athlete of the Week for October 31, 2020 is Brock Inman. He's led the Fox High School football team to an 8-1 record so far this season. The senior quarterback can pass, but he really likes to run, and run, and run. Inman rushed for 176 yards in last night's 42-0 Fox victory over Vianney in the first round of the playoffs. Inman scored three touchdowns in the game on runs of 68, one and 37 yards. For the season, Inman has rushed for 821 yards and 19 TD's. Inman has also passed for 345 more yards for the Warriors. Congrats Brock Inman, the St. Luke's Urgent Care Athlete of the Week.

Nominate an “Athlete of the Week” 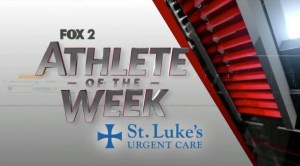 Know a super high school athlete? Submit your nomination for the St. Luke’s Urgent Care Athlete of the Week. Some of St. Louis’ best athletes are featured every Saturday night on during Sports Final. What are you waiting for?

Nominate an Athlete of the Week