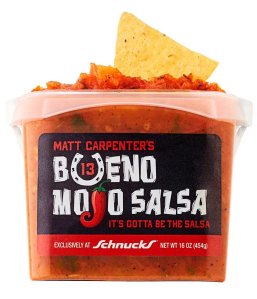 ST. LOUIS, MO — Matt Carpenter's magic salsa is officially on shelves at area Schnucks today.  We've been sampling it and it is good.  It tastes sweet and isn't too spicy.

A representative from Schnucks says that some stores have already sold out at some stores. Other stores won't get their first shipment until this morning. However, all will be receiving limited shipments throughout the weekend.

The salsa shirt is the giveaway at tonight's game.  The first 20,000 fans ages 16 and over will get one.

The Cardinals are on a hot streak during the end of the season. Some say Matt Carpenter’s salsa recipe may be the secret to the team’s success. Starting this Thursday you’ll be able to buy Carpenter’s Bueno Mojo Salsa at St. Louis area Schnucks stores.

Adam Wainwright planted a garden in his yard this summer. Carpenter combined some of Waino’s veggies in a secret recipe to bring along to a July series against the Chicago Cubs. He set a record during that series with a streak of 12 extra base hits in a row. Several other teammates have been sampling the stuff over the last two months and now the team is now in the top 3 for the National League Central Division.

Schnucks says Carpenter’s salsa will be available in the deli section of any St. Louis-area Schnucks store for $6.99. They say Carpenter personally worked with one of their top chefs to package his secret recipe and share it with the entire region.

Schnucks will donate a portion of the proceeds to Cardinals Care.

ST. LOUIS – Want to take the kids fishing for free this weekend? Free Fishing Days happens once a year and it’s a chance for anyone to get out and fish in any public waters in the Show Me State without buying a fishing permit, trout permit, or trout park daily tag.

This annual event always takes place the Saturday and Sunday after the first Monday in June.

A person with knowledge of the situation says the NBA’s Board of Governors has approved a 22-team format for restarting the league season in late July at the Disney campus near Orlando, Florida.

The format calls for each team playing eight games to determine playoff seeding plus the possible utilization of a play-in tournament for the final spot in the Eastern Conference and Western Conference postseason fields, said the person who spoke to The Associated Press on condition of anonymity Thursday because the league had not yet revealed the vote result publicly.

NFL coaches allowed to return to team facilities on Friday

Coaches will be allowed to return to NFL team facilities beginning Friday as the league continues preparation for training camps and its season.

Commissioner Roger Goodell told the 32 clubs on Thursday that coaching staffs may from team complexes starting Friday. Previously, only up to 75 people per day could be at the facilities, with coaches and healthy players barred.

“As has been emphasized in previous advice on reopening facilities, this may occur only if your club has otherwise received necessary permission from state and local governments to reopen its facility,” Goodell wrote.

All coaches will count toward the maximum number of club employees in the facility, but that number will be increased to 100 - also subject to governmental regulations and implementation of health protocols developed by the NFL's medical staff.

Goodell said the league would be working with each team's medical staff to implement a program of COVID-19 testing for the coaching staff and other football personnel “prior to players returning to club facilities.”

The commissioner did not mention in the memo when players might be approved to return to team facilities. It's likely that won't be until training camps open next month.