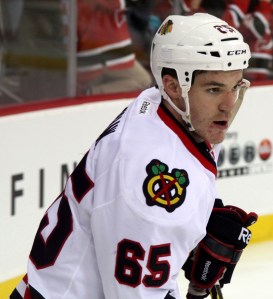 CHICAGO (AP) – The NHL has suspended Blackhawks forward Andrew Shaw for one game for yelling an anti-gay slur from the penalty box and fined him $5,000 for an inappropriate gesture toward the officials during Chicago’s Game 4 loss to the St. Louis Blues.

Shaw will miss Game 5 in St. Louis on Thursday and he will be required to undergo sensitivity training.

The league’s announcement on Wednesday came hours after Shaw apologized for his outburst the previous night. Shaw said he couldn’t sleep after the game and watching video of his outburst was difficult. It was video of the incident that went viral on social media, prompting sharp criticism and an NHL investigation.

St. Louis leads the series 3-1 and can eliminate Chicago on Thursday.

Binnington's likeness will be used as Hallmark's 2020 NHL ornament.

ST. LOUIS - The St. Louis Blues will wear their Reverse Retro jersey for several games during the 2020-21 season.

The jersey revealed on Monday, in partnership with the NHL and adidas, "completely flips the colors used on the team's sweater worn in the late 1990s."

COVID restrictions may be paying off, hospital admissions going down

Winter brings the heat with increase of fires; how to safely stay warm

Avoiding the virus: Here’s how to manage your risk

Murder charge in I-170 shooting; police call it a road-rage incident