ST. LOUIS, MO – When the St. Louis Cardinals played against the Arizona Diamondbacks last night, we had a delay of game when “funny” Cardinal fans attempted to run around the field in the middle of the game. Now they were not streaking, thank God, but they were running around in the middle of a play. Now let’s think about it- at what point does jumping over the fence, running out on to the field, potentially getting tazed, and possibly thrown in jail, sound fun? To me, it sounds horrendous. These men felt courageous, well courageous in their mind. I wonder how much soda they were drinking? Now, they obviously know that this is not going to air on TV, so therefore they will not earn their 15 seconds of fame. However, we all know that pictures and videos of themselves will be leaked everywhere on the internet. No fear, we have pictures to prove it.

The last guy trying to do this scored–these guys quickly got out. #doubleplay #cardinals #stl #jailtime? @slmpd? pic.twitter.com/zV8k15ZDGl

And no worries Cardinals fans, the Cards beat the Diamondbacks 6-4 last night.

How about we give our St. Louis Cardinals fans a round of applause. According to Sports Illustrated, Cards fans recently set a new Guinness World Record by simultaneously taking 4,296 “selfies” in between the plays, bites of Nachos, licks of ice cream, and of course, the most annoying of all, bathroom breaks.
Speaking of “selfies” the Queen of “selfies”, Victoria Secret Angel and St. Louis’ very own, Karly Kloss, threw out the first pitch on Memorial Day.
Here is our very own Rebecca Roberts striking a pose with the Angel! 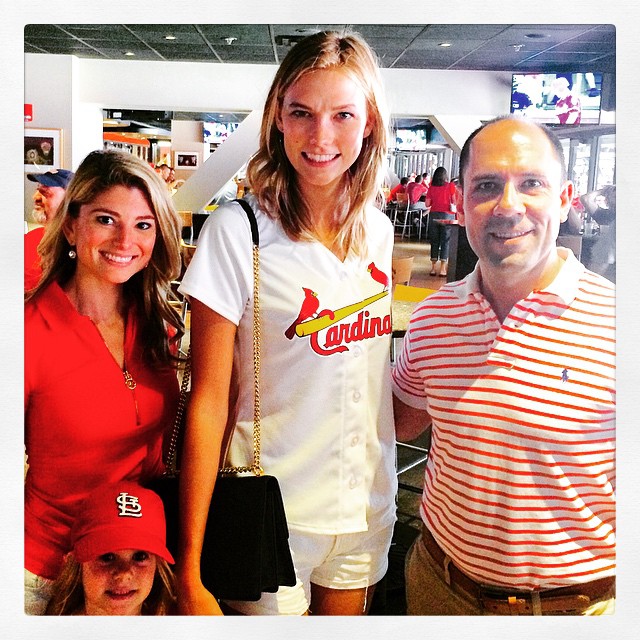 That’s it for today. What was the moral of the story? Please don’t run onto the field during a Major League Baseball game, it’s just stupid.

EDITORIAL NOTE:  Natalie Buck is a student at Indiana University.  This is an ongoing project as part of her internship at KTVI and KPLR.